One of the top Panama attractions and at the same time the country’s economic heart is the canal that connects the Atlantic and Pacific Ocean. And what a piece of work it is! The ships that pass there are gigantic. But it’s not just the canal and the docks that are impressive to see. The nature surrounding the canal is just magnificent! We spent a day at the Panama canal and can’t wait to tell you all about it. 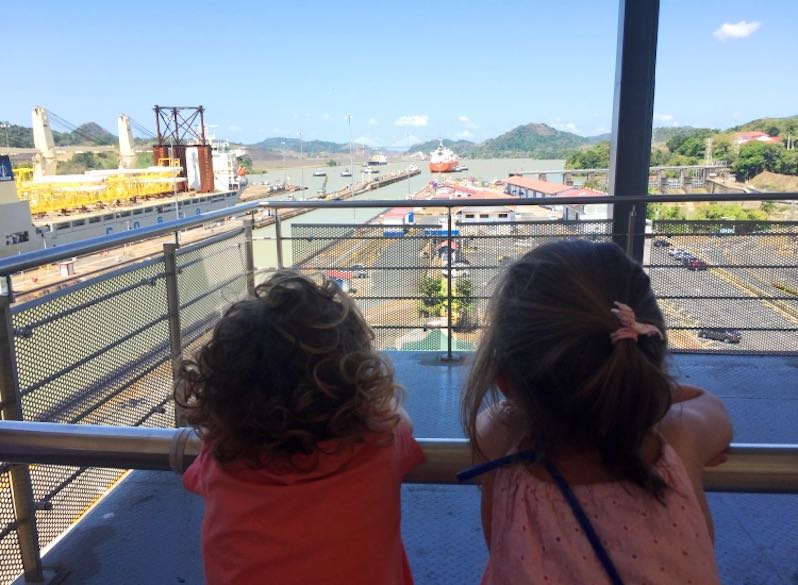 Ever since the Spanish occupation in the 16th century it was clear that Panama was the link between both oceans. By the end of the 19th century the French, led by Ferdinand de Lesseps, started digging. But, as the terrain was more hostile than they’d anticipated and they had to deal with both tropical diseases and financial problems, the Americans took over. They finally ompleted the 75km long canal in 1914. On the last day of the 20th century the sovereignty was officially transferred to the Panamanians as agreed in the Torrijos-Carter treaty signed in 1977. A separate neutrality treaty stipulated that the United States would defend the permanent neutrality of the canal.

We started our day at the Panama canal in the Miraflores docks, one of 3 docks of the canal, and its visitors center in the morning. At his time of day the vessels cross from south to north, so from the Pacific to the Atlantic Ocean. In the afternoon the opposite action takes place. However, ome flexibility to this rule is allowed on calmer days. 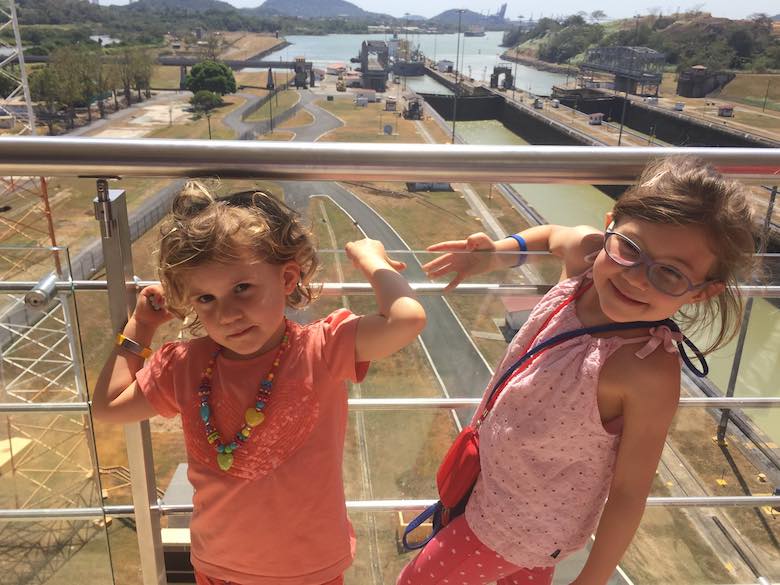 In the museum’s simulator one can experience maneuvering such a giant vessel through the docks. The center also shows a short video about the canal’s history, available in English and Spanish. This only takes about 15 minutes so you get the chance to learn something about the canal without the kids feeling bored. Admissions are $15 per adult and $10 per child.

Ships that are crossing the canal nowadays are called Panamax and can transport up to 5000 containers. At the time of publishing this post, the canal is being expanded. Pretty soon the capacity will double. The canal will then be able to accommodate Neopanamax vessels carrying around 13.000 containers. 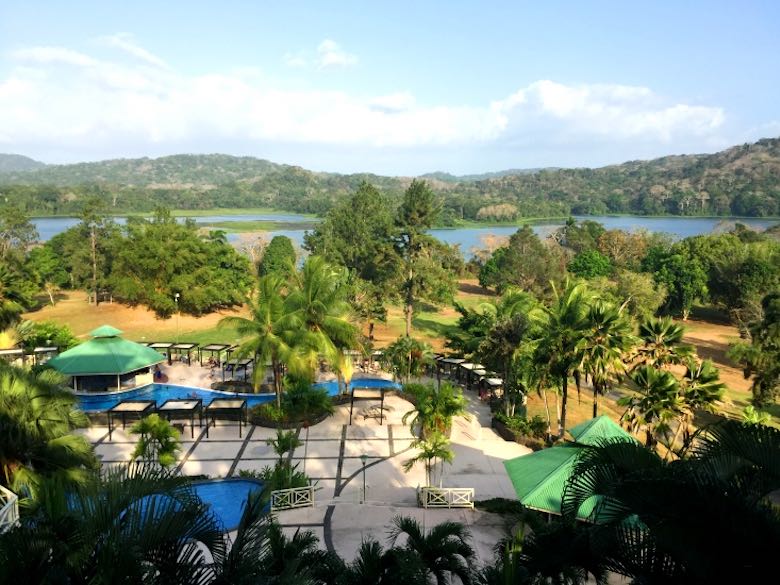 Generally, when booking such a tour, the company arranges a pick up from the hotel. However, as a result of of the carnival, the tour company was short-staffed. So, we had not other option than to arrange for private transportation. In return, they reduced the regular price of $125 per adult and child over 4. We had booked the combo tour which combines a boat tour to Gatun-island with the aerial tramway experience.

An appropriate vehicle transported us over the resort domain to the lunch location where we could enjoy a buffet on a deck offering breathtaking views. It would have made more sense to have lunch in between both tours. But hey, it’s carnival. So, we just went with the flow. 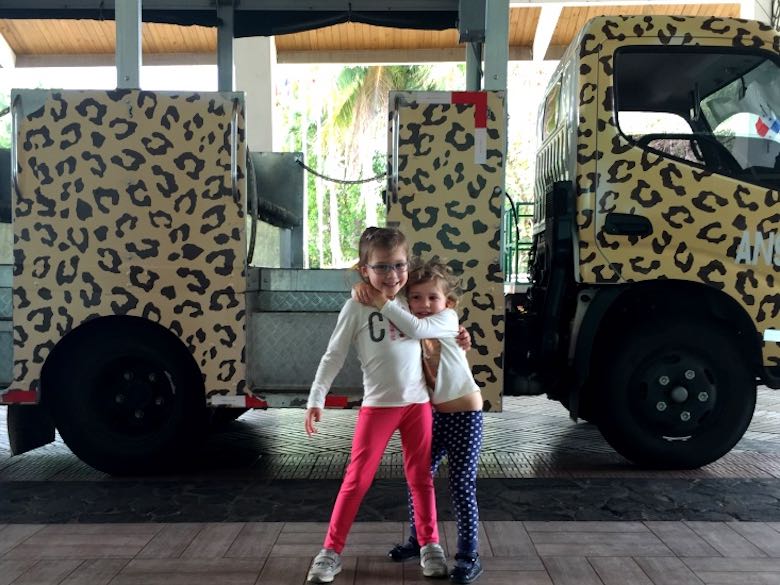 The piers are right across from the lunch location and after a short wait in the company of some beautiful butterflies and putting on the life jackets, we were ready to board the small boat. Unfortunately, by the time we entered, we only found one free bench… the one in the back. What a bummer because the noise and fumes of the motors really kept us from enjoying this tour. 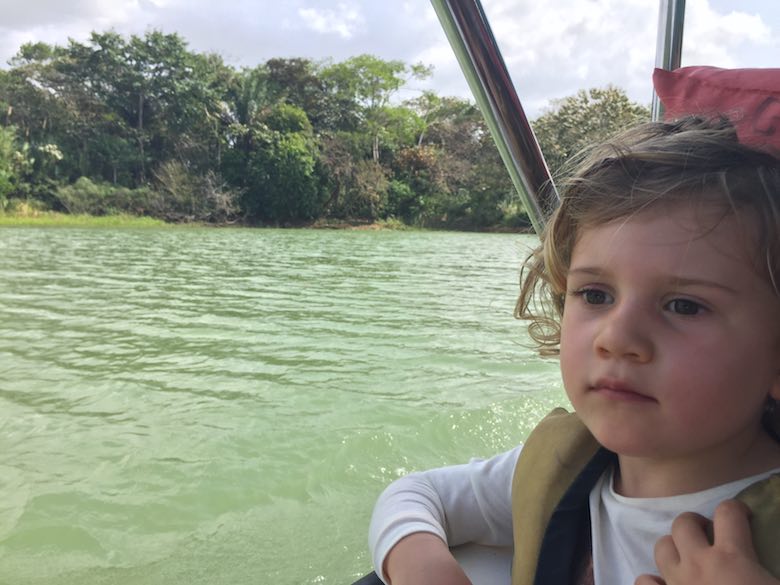 The small boat crossed the Chagres river and arrived in lake Gatun. Many monkeys call the islands here their home so the girls had been looking forward to meet them. After some searching and thanks to the call notes from our guide, we spotted the capucin monkeys. And at the shore of another island we caught a glimpse of a crocodile sliding into the water. Too quick to catch it on camera, unfortunately. 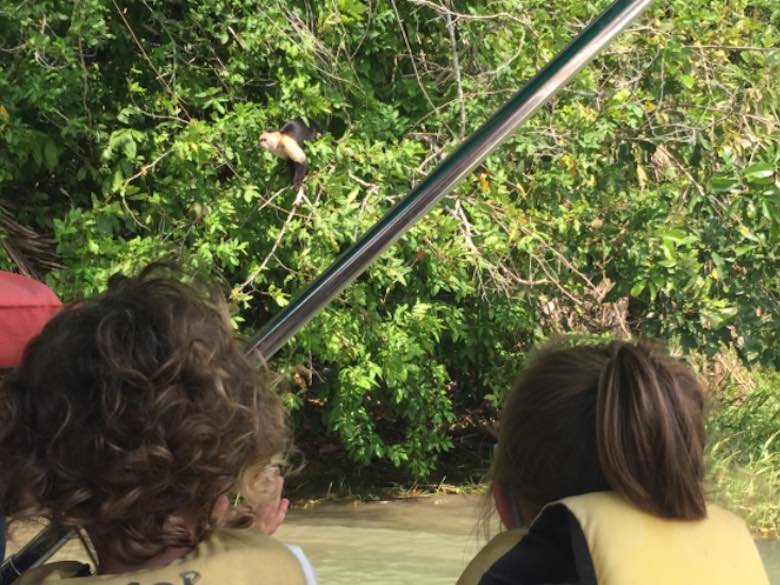 The islands in this lake used to be mountain tops but for the sake of the canal this area has been flooded. And this is how Lake Gatun was created.

After 1,5 hours of boat and gasoline fumes, we were happy to board the pick-up van. We headed to the aerial tramway where we could finally smell nature again. This activity looked so promising! Together with 3 American tourists and a great guide, the excitement increased as we gained altitude. It was picture perfect! We heard tucans and howler monkeys and enjoyed the overwhelming nature. We got out on top of the mountain. After a short stroll through the rainforest and a climb to the observation deck, we could indulge in the stunning views. What an amazing place! Twenty minutes passed too quickly and, much to our regret, it was time to board the aerial tramway, It was the end of a short but unforgettable first rainforest experience. We truly wish it would have lasted much longer!

Mosquitos are to be expected in this climate. So, we were armed with insect repellants and also made sure to cover the girls’ arms and legs during the rainforest tours. Eventually we all returned home without a single bite so don’t let the fear of mosquitos keep you from exploring this beautiful scenery. It definitely deserves a spot on your shortlist!

This day at the Panama canal was only part of our vacation in Panama City. Make sure to check out our posts on Contadora Island, one of the Pearl Islands of Panama.