In the shadow of Valletta and just across the magnificent Grand Harbour, you’ll find the Three Cities of Malta. This area consists of Vittoriosa, Senglea and Cospicua or, as originally named, respectively Birgu, Isla and Bormla. Together, they offer visitors an overload of authenticity and plenty of charming gems that are not yet found in any travel guide. The Three Cities in Malta are still a well-kept secret and turned out to be the highlight of our Malta sightseeing trip. 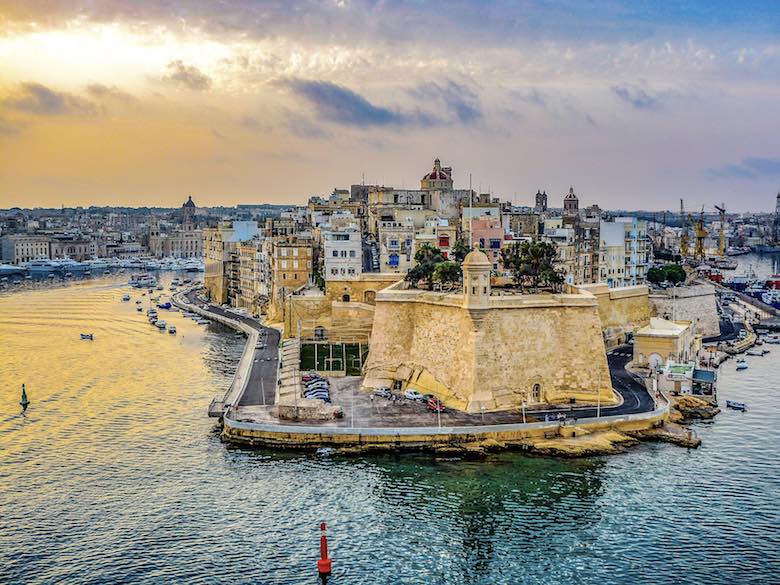 Historic importance of the Three Cities

Throughout history, Malta’s strategic location in the Mediterranean was highly sought-after. In order to protect the Grand Harbour from foreign invasions, a large defence system had to be put in place. The Santa Margarita Lines were a first attempt but remained half-finished. In the 16th and 17th centuries, the Knights of St John came up with an improved version, the Cottonera Lines, funded by and named after Grand Master Nicolas Cotoner. This massive line of fortifications, with bastions and triumphal gateways, was spread out over the land of the Three Cities. 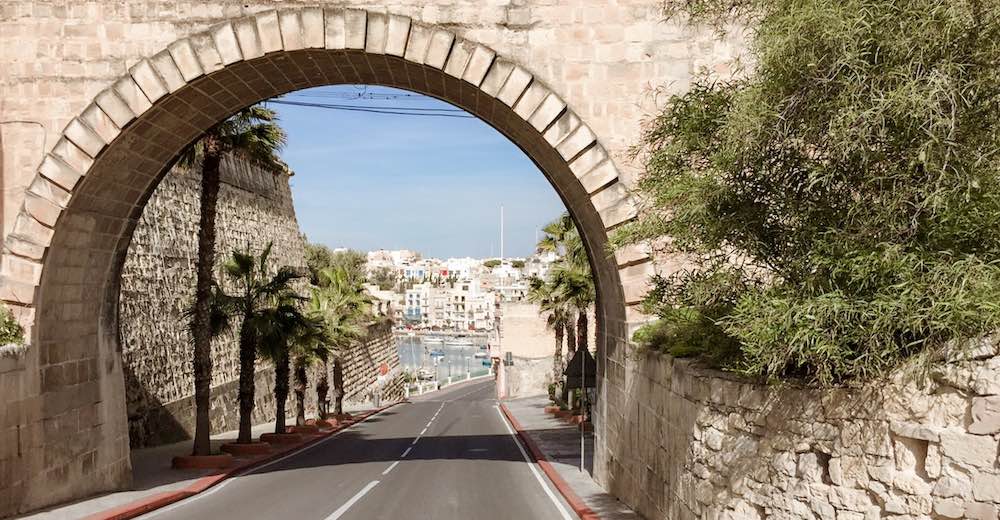 Again because of the enviable location of Malta and the economic importance of the Grand Harbour, the Three Cities were heavily bombed during World War II. While many buildings were destroyed, lots of others stood their ground.

The 3 Cities of Malta and the capital of Valletta are opposite from the Grand Harbour. When you look closely, you’ll see that the two parallel peninsulas of Birgu (Vittoriosa) and Senglea (Isla) are connected by a pedestrian bridge.

How to get to Three Cities in Malta

We went to the Three Cities by taxi and that was a big mistake. Malta is a small island with many inhabitants which makes for terrible traffic. Another thing is that old cars, the kind that wouldn’t be allowed to drive anymore in most European countries, have somehow ended up in Malta. Add the warm climate to the mix and you get a cocktail of exhaust fumes from which there’s no escape. A taxi ride under these circumstances is anything but pleasant and always takes longer than planned. The same goes for public transport. This is not how you want to spend your Malta sightseeing trip. 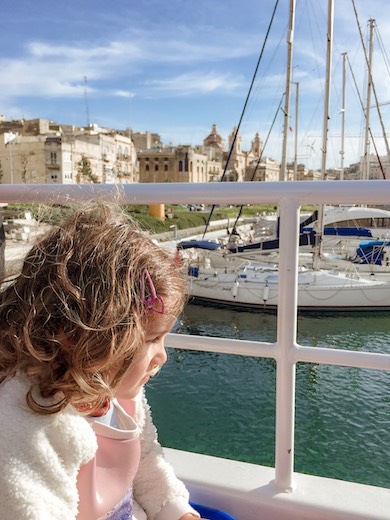 So, go for fresh air by taking a 5-minute water taxi ride from Valletta across the Grand Harbour to Cospicua (Bormla). This will also give you the opportunity to enjoy the spectacular views of the St Angelo Fort, sitting on the tip of Birgu (Vittoriosa) and Gardjola Gardens, on the tip of Senglea (Isla), as you come closer to Three Cities Malta.

Tip: Before you take the ferry, take in the supreme view of the trio of cities from Valletta’s Upper Barrakka Gardens.

After the attacks of the Ottomans during the Grand Siege, the Knights of Malta renamed the Cities to reflect their bravery:

These names are still used interchangeably, an aspect to take into account when planning your Malta sightseeing adventure.

Birgu is the oldest of the Three Cities and, in our opinion, the most beautiful city in Malta. It was actually the capital city of Malta, and the home base of the Order of Saint John, before Valletta took over. The impressive Fort St Angelo is one of the most distinctive landmarks, located right next to Birgu’s classy marina, overlooked by the St Lawrence Church. 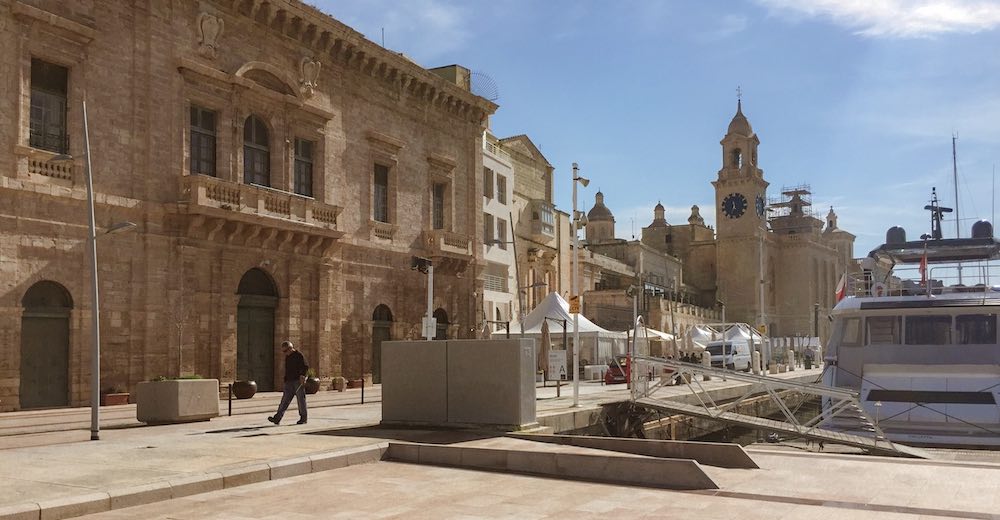 But Birgu has plenty of other attractions, more than the other two cities. Before it became the seat of the Inquisitors, the Inquisitor’s Palace was a courthouse. You can still see the carvings left by prisoners in the palace’s prison cells. The Malta Maritime Museum displays the country’s long maritime history and its influence on the Maltese culture. 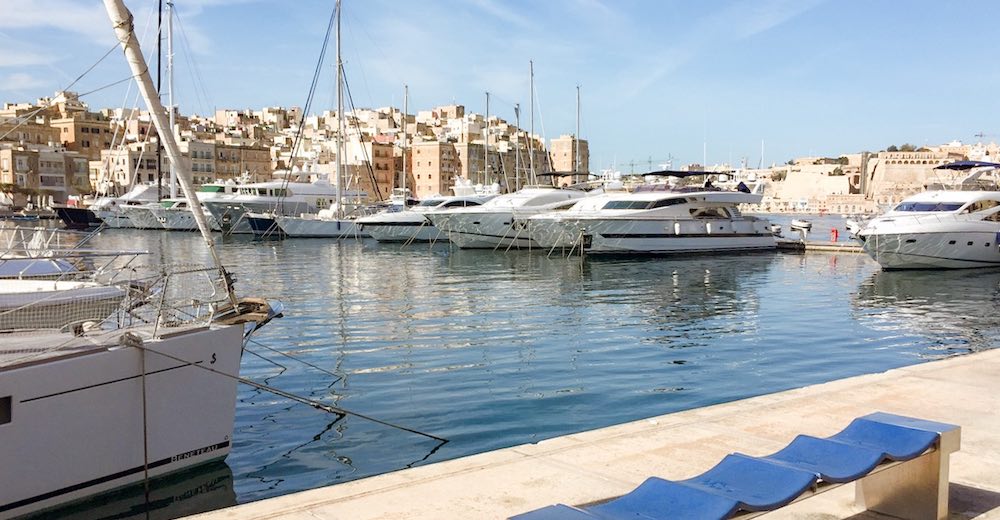 This city definitely tops our list of best places to visit in Malta and it was the highlight of our Malta sightseeing trip. For one, there’s not as much traffic here, since some streets are even too narrow for cars. The narrow streets of Birgu (Vittoriosa) have been beautifully restored and are some of the prettiest we’ve walked. Secondly, the atmosphere is still genuine. You’ll notice this in the various bars and small eateries. And last but not least, we just can’t get enough of the striking harbour views.
[one_half] 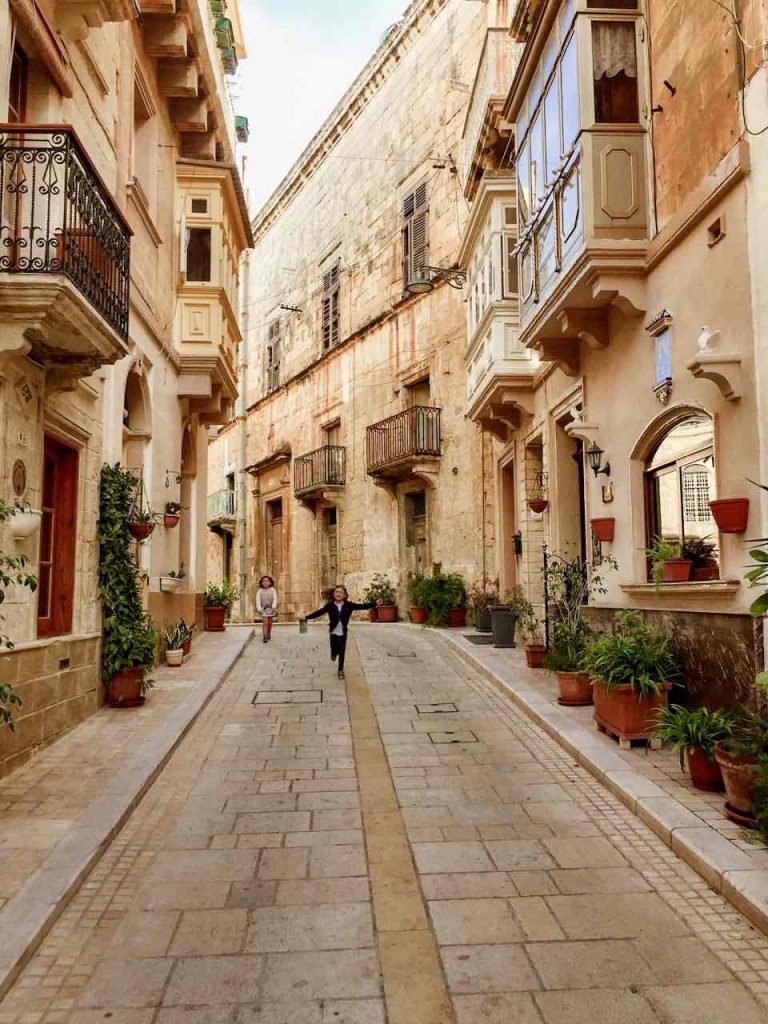 Isla is the smallest of Malta’s Three Cities. It’s home to two forts, one on either side of the peninsula: Fort St Michael and Fort St Angelo. The Parish Church of Our Lady of Victories is also worth a visit. We found the highlight at the very tip of the city: Gardjola Gardens, a small park offering the most gorgeous views over the Grand Harbour. 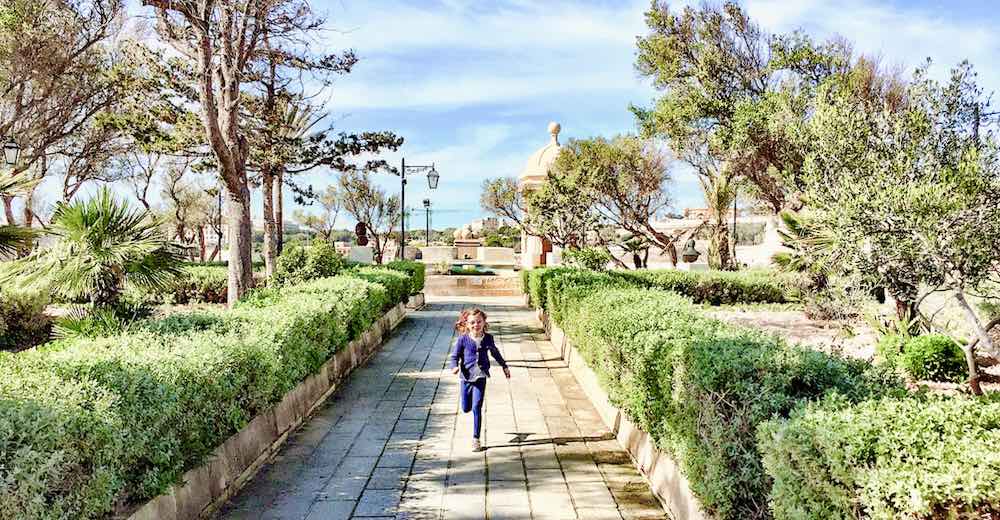 Bormla is the largest of the Three Cities. Admire the fortifications and take a look inside the The Church of Our Lady of the Immaculate Conception, one of the few buildings in the city that survived the World War II bombings. Soon, a new marina will arise on the grounds of the old dockyards. 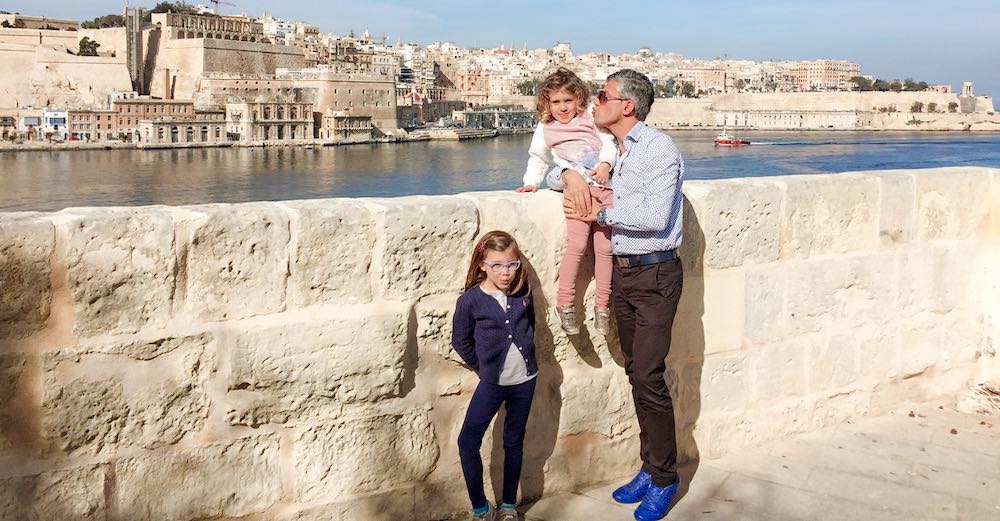 We had the privilege of visiting the – top secret 🙂 – clubhouse of the Conspicua (Bormla) rowing team to admire the regatta boats. Traditional regatta races are held twice yearly in Malta’s Grand Harbour: On 31st March (Freedom Day) and on 8th September (Victory Day). Rowing crews participate in 10 races under 2 different categories in typical traditional Maltese boats.

It just happens that this same Conspicua crew won the March race that same year, just a few weeks after our visit, for the 17th time in history. Karma! 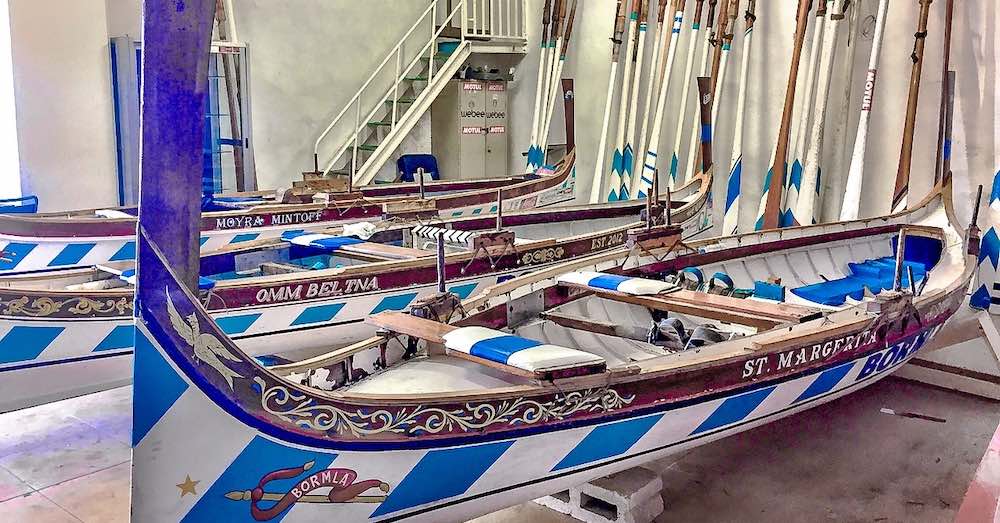 How to explore the Three Cities of Malta

One way to enjoy gorgeous views over Valletta and the Three Cities is by taking a cruise in the Grand Harbour. It has been used as a harbour since the Phoenician times and throughout history, it was the scene of many battles and the country’s economic heart.

There are several excursions in Three Cities Malta, some offering a combination of cruising and walking. Here are some options:

I must admit that I had never heard of the Three Cities until I read about it in Air Malta’s onboard magazine. It was mentioned in an ad for the coolest little electric cars ever – Rolling Geeks – and that’s why it stuck with me. I was determined to test out this electric buggy with pre-programmed GPS with the girls. 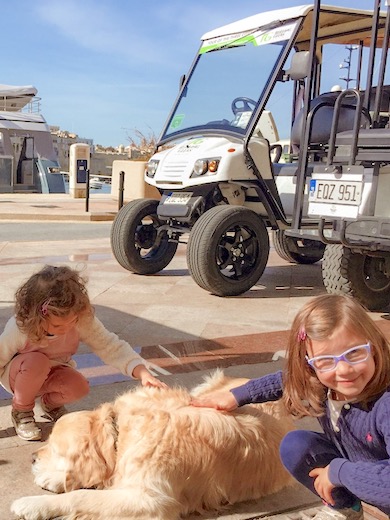 We paid €80 for a 2,5 hour tour. That rate includes a minion on standby to help you out via the intercom should you get lost and the buggy is equipped with a selfie-cam. Car boosters are available for your minions – uh – kids. These Rolling Geeks are pretty neat! There’s no better way to do a Three Cities tour to learn all about Malta’s 3 little gems in just one day. We had a blast! 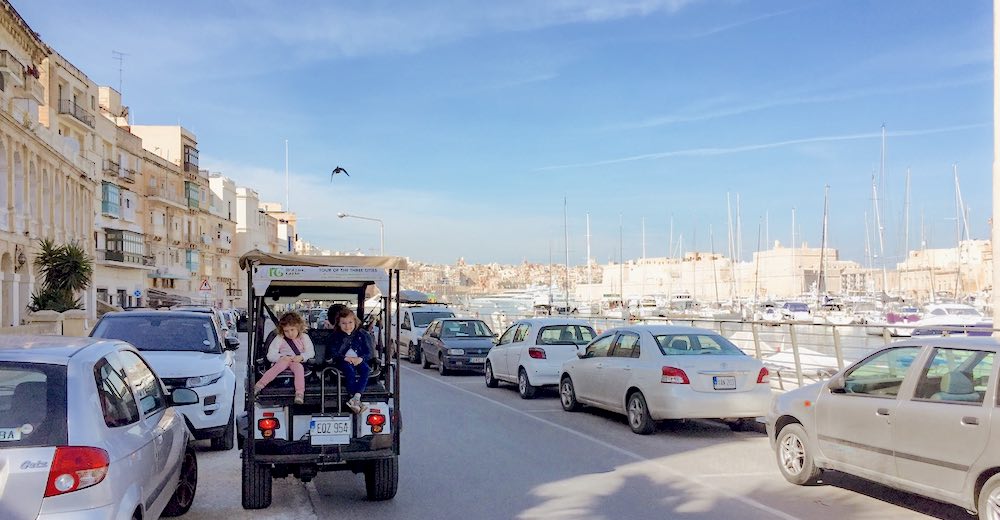 Where to stay in Three Cities?

Not many hotels have found their way to Three Cities yet. That might just be a good thing, since it gives the area a certain exclusivity. But don’t worry, we’ve found you this little gem: The Cugó Gran Macina Grand Harbour. It’s a 5* hotel in Senglea (Isla) that’s part of Marriott’s Design Hotels collection and it offers the most stunning views (especially from the rooftop pool).

Should you prefer to stay in Valletta then you might find your next hotel in our article on 5 star hotels in Malta.

When will you visit the Three Cities in Malta?

Do you see yourself cruising around Three Cities in your little electric cart? We bet you do! Take it all in: the picture-perfect narrow streets, the gorgeous views over the Grand Harbour from Gardjola Gardens in Senglea (Isla) and the glamour or the posh marina in Birgu (Vittoriosa).

Along the way, you can enjoy lunch with locals in a hole-in-the wall cafe or have a picnic on the soft sand of tiny Rinella Bay, which is about the only beach you’ll find in this area.

Looking for more beaches on the Maltese islands? Then check out our article on the best beaches in Malta.

Have you been to Three Cities and fell in love with Birgu, like we did? Or will you travel to Malta anytime soon and are the Three Cities on your Malta sightseeing list? Let us know in the comments.

Note: All pictures are ours, except for the gorgeous featured image which is a courtesy of a photographer on Pixabay.