Maui is the best Hawaiian island for family vacations, especially with toddlers and younger kids. One of the must-sees on Maui is the magical banyan tree that sparks the imagination. This magnificent tree is over 60 ft high (about 18 m), its crown 225 ft wide (about 70 m) and the canopy spread over an area of 0.66 ac (0.27 ha). It looks as if it’s more than one tree but the aerial roots actually formed 16 new trunks that act as a support for the ever-growing tree. So, the banyan tree on Maui not only grows vertically but just as much horizontally, creating some kind of mini-forest. No matter where you stay in Maui, this is a must-see.

An interesting fact about Hawaii‘s remarkable giant: Measuring the size of a city block, is the largest banyan tree in Hawaii, the largest in the United States and even one of the largest of its kind worldwide. How incredible is it that, what you see on this picture, is just a small part of this gracious giant. Let’s find out where it’s located and when and why the Maui banyan tree, which is non-endemic to Hawaii, was planted.

Where to find the banyan tree on Maui

The Maui banyan tree is located at Banyan Tree Park (the former Lahaina Courthouse Square) in the heart of Lahaina, the historic whaling village in West-Maui, close to the Ka’anapali beach resorts. Behind it, you’ll see the Lahaina Courthouse, adjacent to Lahaina Harbor.

Why the banyan tree was planted in Lahaina

It’s no coincidence that this tree was planted in Lahaina. King Kamehameha declared the town the capital of the Hawaiian islands in 1820. And thanks to its ideal location on the whale migration routes and the calm ocean conditions, colorful Lahaina became a major whaling port in the 1800s.
Soon after, King Kamehameha II also ended the strict kapu rules and began to allow missionaries to settle in the Hawaiian islands. The written form of the Hawaiian language was introduced and soon, the first high school openend.

The Lahaina harbour had hundreds of ships docked. But the decadent behaviour of the sailors soon clashed with the attempts of the missionaries to impose their beliefs. The tempers flared in sun-drenched Lahaina and, in 1845, the capital was relocated to Honolulu. Disorderly sailors were sanctioned and the missionaries remained.

Queen Keopuolani, King Kamehameha I’s Sacred Widow, instructed sheriff William Owen Smith, to plant a special tree in 1873, to celebrate the 50th anniversary of the first American protestant missionary in Lahaina town. An 8-ft banyan tree sapling was imported from India. This remarkable tree, part of the fig family, symbolizes enlightenment in Buddhism and eternal life in Hunduism. Throughout its history, the Maui banyan tree has been the epicenter of local celebrations. From Kamehameha’s birthday party in long-gone times to the Christmas festivities in this day and age, the Hawaiian banyan tree is at the heart of every event.

What the banyan tree in Maui stands for now

The banyan tree on Maui has been part of Lahaina’s history for almost almost 150 years. To this day, it’s a gathering place for locals and visitors alike. The many benches and picnic tables invite to linger in the shadow of the banyan’s sweeping branches. After a busy day of exploring Maui with kids, the little ones will love climbing the major trunks of this magical tree. Our girls sure did!

To this day, the banyan tree on Maui is a preferred festive location in Lahaina. Twice a month, Art in the Park displays works by locals artists. And in the beginning of december, there’s the Annual Lighting of the Banyan Tree. Imagine celebrating the holidays in this fairy-tale setting, with 6,500 twinkling lights adorning the dangling vines.

Other things to see and do in Lahaina

As mentioned, Lahaina has a history of entertaining visitors and it still does today. You’ll find plenty of restaurants, cafes and shops along and near Front Street. There’s a lively art scene as well, with dozens of art galleries dotting the streets. The Lanai ferry as well as many snorkeling and whale-watching trips depart from the ever-bustling Lahaina harbour.

Surprisingly, behind that swinging surface, there’s also plenty of history to be discovered. The self-guided Lahaina Historic Trail leads visitors along dozens of historic sites. The best thing is that it only takes about an hour to complete since Lahaina is very compact. Maps can be found at the Lahaina Visitor Center in the Old Lahaina Courthouse, right next to the banyan tree at Lahaina Banyan Court. Or you could download it from the website of the Lahaina Restoration Foundation.

Last but not least, Lahaina is the place to be when it comes to attending a luau on Maui: The classic Old Lahaina Luau and the luxurious The Feast at Lele are the best luau performances on the island.

Where to stay in Lahaina

Lahaina is a lovely little town. Its lively vibe, the proximity to Ka’anapali beach and the many excursion options from the harbor make it an excellent place to stay in Maui. These are the Lahaina vacation rentals we have our eyes on:

If you plan on island hopping in Hawaii, like we did, you might come across some other magnificent banyan trees.

When will you visit the remarkable Lahaina banyan tree on the Valley Isle? 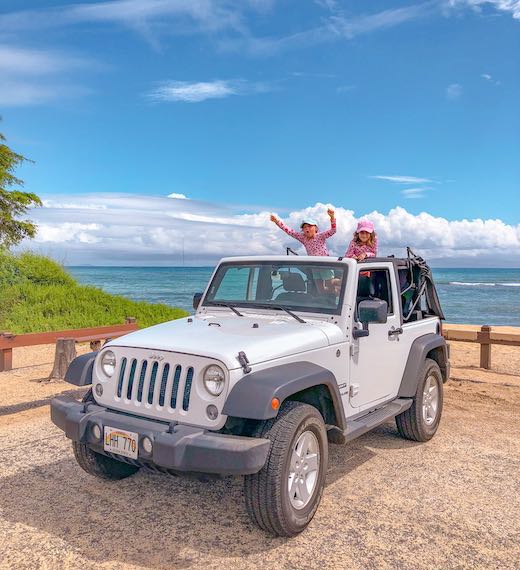 Going to Hawaii? You need a car!Booking your rental car in advance is ESSENTIAL to get the BEST PRICE.

Don't stall, book your car right away and enjoy a care-free Hawaiian trip.

Book your rental car now!
Travel along with us...by subscribing to our newsletter.
We use cookies on our website to give you the most relevant experience by remembering your preferences and repeat visits. By clicking “Accept”, you consent to the use of all these cookies.
Cookie SettingsAccept
Manage consent